So, when I first started this blog, I just thought how much fun I would have writing down my thoughts, dreams, ideas, whatever really. But, I've learned that sometimes blogging just stresses me out. There are times that I so badly want to articulate what's going on in my life or mind but really don't know how to write it. Or, sometimes I have a really hard time just being vulnerable and putting my thoughts and feelings out on the table. Like now. Life hasnt been easy lately. My family has experienced,and is still experiencing, a lot of tough stuff. And I've had a hard time processing it and dealing with it. I like life to be easy and to feel happy. So, what happens when it's not and I don't? I stuff it all inside and keep on going with life. Maybe it's a pride thing, maybe I'm just stubborn. Or let me rephrase that- it is a pride thing, and I am stubborn.
Something I've come to realize over my 26 years is that God didn't create us to be happy. That's hard to hear but let me say it again...God did not create us to be happy. He created us to be holy. And the two don't always mesh. If we lived happy perfect lives, how could we go through fire to be refined? How could we appreciate true joy without having to experience trials? I would be way too dramatic if I said that I wasn't experiencing any happiness in my life right now. I can't help but to be happy when I think of all the blessings in my life. But, there are moments when I just want to (and do sometimes) break down and cry. And, I think that's ok in the eyes of God. He created us with emotion and wants us to be broken so we come to Him. I'm probably rambling but I think moments like this are why I created a blog. To be real. To be honest. To ramble...
Let me end with part of an email that my dad sent to his church this week. I think this is what I've been trying to say in a nutshell...what a wise man!
"God is bigger and He promises that He will never leave us nor forsake us. Does this mean that nothing can go wrong? Not at all, but because of the goodness and the love of our God for His children, I am in His hands and there is no better place to be."
Posted by chrisandabbie at 12:14 PM 1 comment:

Well, another year has come and gone! It's hard to believe it's already 2011. My friend Meghan posted the following questions on her blog and I enjoyed reading it so much that I thought I'd answer them for myself! So, here's my review of 2010!
1. What did you do in 2010 that you’d never done before?
I started decorating cakes! I have a new love for baking and I've even sold a few of my cakes!

2. Did you keep your new year’s resolutions, and will you make more for next year?
I'm not much for making New Year's resolutions...

3. Did anyone close to you give birth?
Yes! My aunt had her third child, Daniel, on Feb 26th. They live in PA but I have met him a few times and he is just precious. My friend Meredith (who now lives all the way in Baltimore!) had her second baby boy on Dec 27th, Lance David. A friend and co-worker, Jordan, had a little boy on Dec 22nd, David Brayden. Also, my childhood best friend, Cassie, who now lives in Arizona had TWIN boys, DeAndre and Mason! It's been quite a year of boys!

4. Did anyone close to you die?
No, we had some pretty serious health issues in my family, but no deaths, thank the Lord.

5. What countries did you visit?
Well, Chris believes that Maine qualifies as another country but other than that, none :)

7. What dates from 2010 will remain etched upon your memory, and why?
April 19- the date of my grandmother's surgery which led to 8 long months in the hospital
June 6- Chris and my first anniversary!!

8. What was your biggest achievement of the year?
I won a 5k I entered...that was pretty exciting!
Oh, and I paid off my car! 3 years early :)

9. What was your biggest failure?
Well, I defintely lacked the patience and kindness that I needed...so, failure.

10. Did you suffer illness or injury?
I got bit by a dog, I think that counts as an injury!

11. What was the best thing you bought?
A plane ticket to Boston to suprise my best friend for her 30th birthday!

12. Whose behavior merited celebration?
My husband, he just has a spirit of kindness that I wish I had.
My parents, for a lot of reasons...

13. Whose behavior made you appalled and depressed?
Hmm, I should probably keep my mouth shut on this one.

17. Compared to this time last year, are you:a) happier or sadder?b) thinner or fatter?c) richer or poorer?
a) I think I've been a little bit of both. I love where I am in my life right now but this has been a year of trials and I've also experienced quite a bit of sadness.
b) Thinner, which is strange since I haven't been exercising nearly as much as I used to. My theory: I have to eat my own cooking which half the time isn't very tasty thus causing weight loss.
c) A little richer thanks to a raise.

18. What do you wish you’d done more of?
Walked my dogs. Random, but I feel like a bad dog mom sometimes!

19. What do you wish you’d done less of?
Junk food eating. I can be a bit out of control.

20. How did you spend Christmas?
We stayed in town on Christmas eve and Christmas day and spent time with Chris' family. Then on the 26th we traveled to PA to see my aunt, uncle, cousins, and grandma. Then we finished the trip to Boston on the 27th and spent a week with my family.

22. What was your favorite TV program?
I never get control of the remote. But, Chris and I both get a little obsessed with Big Brother. We also enjoy Biggest Loser, the Sing-Off, and Big Bang Theory.

23. Do you hate anyone now that you didn’t hate this time last year?
I try not to hate anyone.

24. What was the best book you read?
Firefly Lane and True Colors both by Kristen Hannah.

25. What was your greatest musical discovery?
I found out that we get K-Love in Winston-Salem!

26. What did you want and get?
A new North Face jacket. A KitchenAid. A Baby G watch. And probably lots more...

28. What was your favorite film of this year?
Eclipse. But, I still hate that she chooses Edward.

29. What did you do on your birthday, and how old were you?
Went to Village Tavern with Chris. I turned 26.

30. What one thing would have made your year immeasurably more satisfying?
If my parents would have lived here!! A girl can dream, right?

31. How would you describe your personal fashion concept in 2010?
What fashion?? Running clothes and tennis shoes?

32. What kept you sane?
Chris, running, and a little bit of ice cream.

33. Which celebrity/public figure did you fancy the most?
I am a big fan of Kurt Warner and was sad to see him retire!

34. What political issue stirred you the most?
I hate to say it, but I don't pay too much attention to politics.

36. Who was the best new person you met?
My new baby cousin, Daniel!

37. Tell us a valuable life lesson you learned in 2010
Let go and let God. Sometimes things are beyond my control. I have learned to take one day at a time and walk by faith. 2010 brought some hard times for my family but God did and is continuing to guide us through it. 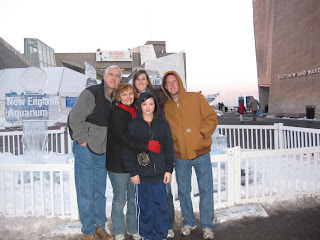