To Daddy from Hudson

"Hudson" sent this card to Chris for Father's Day (funny how it was postmarked from Boston).  At first glance when Chris opened it, we both thought that my dad (I mean Hudson) had it specially made with Hudson's picture!  However, at second glance, we realized this baby is actually a bit chubbier and surprisingly has more hair than Hudson.  But, I don't think there could have been a more perfect card for Chris' first Father's Day! 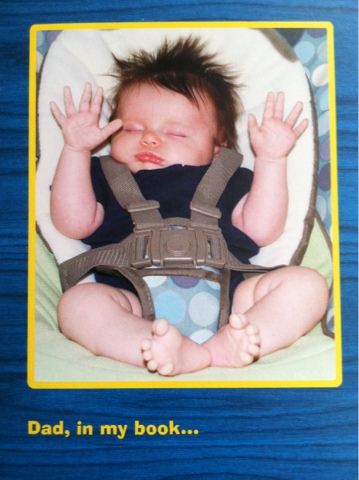 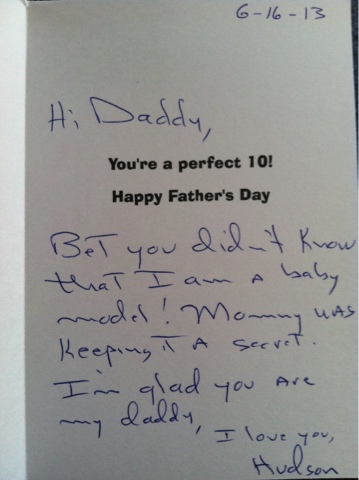 Posted by chrisandabbie at 12:53 PM No comments:

Measurements: Hudson sure is a growing boy!  Chris and I don't own a scale so we had no idea how much Hudson would weigh at his 2 month visit but our guess was somewhere between 12-13 lbs.  We were right!  Hudson weighed in at 12 lbs 14 oz putting him in the 60th percentile.  When he was born, he was a peanut in the 25th percentile and he was in the 43rd percentile at one month. So, he's definitely a good eater!  He measured 23 inches long today (he's grown 2 inches!) putting him in the 68th percentile, up from 25th percentile last month!  His head circumference was 15.5", the 55th percentile.  The doctor said he was just "perfect", nice and proportional.  He is wearing mostly 0-3 month clothes but can fit in some 3-6 month stuff mostly because the cloth diapers add some extra fluff to his butt :)

Eats:  Obviously Hudson likes to eat!  He is exclusively breast fed although we are doing at least one pumped bottle a day now, usually at bed time.  He is no longer a sleepy newborn and gets easily distracted while nursing- he wants to look all around, kick his feet, pull momma's hair, etc.  When he is bottle fed he will eat between 6-7 ounces of pumped breastmilk.  He is eating 6 times a day and we are on a pretty good routine now as to the times that he eats.

Sleeps: I count my blessings everyday for my good sleeper!  We are in a nap routine during the day, although I try not to be too rigid about it as I don't want to plan our life around it.  If we have somewhere to go, we just go and I hope he sleeps in the car or stroller.  So far, it hasn't seemed to affect him...he isn't terribly cranky if he misses a nap.  But, as of now, he is napping in his crib 3 times a day if we are home, usually mid morning, early afternoon, and then early evening.  I try to feed him, keep him awake for about an hour, and then put him in his crib when he shows signs of sleepiness.  He hasn't had any trouble putting himself to sleep...we haven't had to let him "cry it out" because he rarely fusses much when we put him down (have I mentioned how thankful I am!).  He is going down for the night around 10pm and usually sleeps until about 5am.  At that point, I go in and rock him a little and he falls back asleep until sometime between 6-7.

Milestones:  Hudson is smiling!  This is one of the sweetest sights I have ever seen.  I can already tell he loves his daddy and gives him lots and lots of grins.  He also loves when I sing to him and usually gives me a big smile.  He is also becoming more and more independent.  He loves playing on his playmat and also enjoys tummy time (when he's in the right mood).

Likes:  Being held!  He loves snuggling close and being rocked.  When he's really tired he loves to fall asleep on Daddy's chest.  Hudson also really enjoys bath time, especially his hair being washed.  He continues to love riding in the car and the stroller which is good because Chris recently took up running. So sometimes Hudson gets to go for a run twice a day!

Dislikes:  His swing...he will tolerate it for about 5 minutes but that's enough for him!  He also does not like to be still (which is why I cant figure out his dislike for the swing)!  He wants you to be moving when you hold him, unless he's super sleepy and you are his daddy :)

Have I mentioned lately how much I love this sweet boy?!  Sometimes I think my heart might burst! 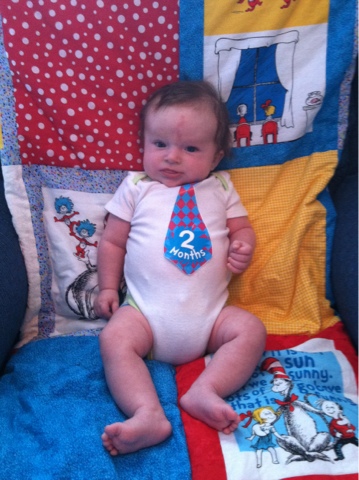 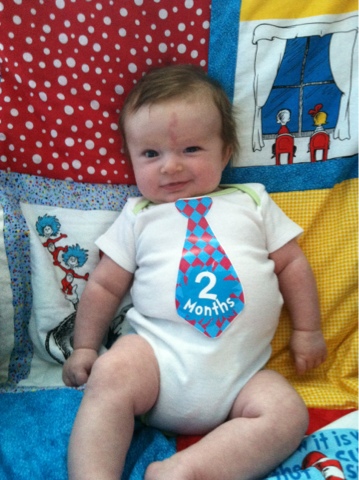 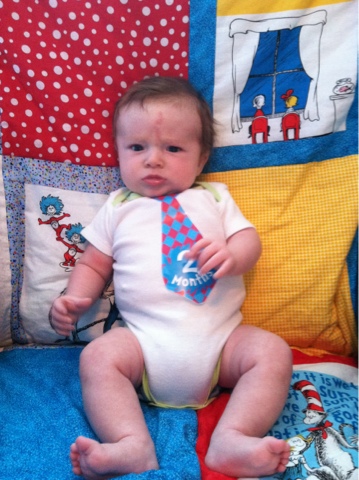 Posted by chrisandabbie at 11:15 AM No comments:

Last week, June 6th, Chris and I celebrated our 4th wedding anniversary.  We always try to get-away for a few days for our anniversary and we didn't want this year to be any different.  So, we packed up (which takes a little more effort with a 7 week old) and headed to Todd, NC for a few days.  Todd is a little (I mean tiny) town right outside Boone.  To be honest, I got a little nervous driving there because we were literally in the middle of nowhere. I think I asked Chris more than once, "where in the world are we??" But, it turned out to be an adorable cabin and it was actually really nice to be away from all technology (no television, internet, or cell phone service!) and just spend time together.
We got to the cabin on Tuesday and realized that we at least needed to find a grocery store and gas station so we decided to go into Boone (about 25 minutes away) for the evening.  While we were there we visited the Mast General Store and ate dinner at Macados.
On Wednesday we went to Elk Knob State Park and Hudson went on his first hike!  I wore him in the Baby Bjorn and we hiked the 4 mile trail.  He slept pretty much the entire time.  I was a little nervous about having a 7 week old at such high altitude but the lady in the park office assured me that it was fine.  It was so nice to get back into hiking and we can't wait to do some more!
On Thursday we just relaxed around the cabin in the morning and headed back to Clemmons by the afternoon.
Overall, it was a great trip and I think Hudson really enjoyed his first vacation! 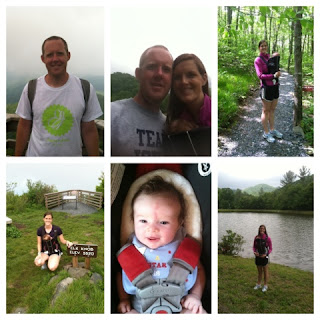 Posted by chrisandabbie at 2:23 PM No comments:

The past 8 weeks since Hudson has been born have flown by.  In those weeks I have learned some valuable lessons about mommy-hood.

1. The joy of being a mother is indescribable.  I fall more and more in love with this little boy every day.  I knew I would love being a mommy but now I know what people mean when they say it's a love you have never felt before.

2. Leaving Hudson, even for a few minutes, is harder than I ever thought it would be.  I used to say that I wasn't going to be a super over-protective mother but I take it all back.  Last weekend was the first time that I had ever been away for Hudson for more than 15 minutes and I found myself fighting the urge to text Chris for an update every few minutes.  I know time away from him is healthy and having an occasional date night with my husband will be very good for our marriage but it's going to take some getting used to, especially when I go back to work in 2 weeks.  I think that I prayed for so long for God to bless us with a child that now that he's finally here, I don't want to miss a minute!

3. When I was pregnant someone told me that the best advice they could give me was to not listen to anyone's advice.  I know completely know what they mean.  Everyone has their own ideas of what to do with babies- especially when it comes to sleep training.  When I was pregnant I read everything I could on parenting and while there certainly was some good insights in those books, what I have found is that you really just have to kind of wing-it.  When Hudson was first born I was so stressed about getting him on some sort of schedule (Babywise says to start at one week right??) but it didn't work.  I quickly learned to just relax and enjoy him.  And now, at 8 weeks, he has put himself into a pretty predictable routine and as long as he's happy and rested, that's all I'm worried about now.

4. It's important to continue with your life!  I am now a mother but I am still a wife, daughter, sister, and friend.  Those things are still as important as they always have been.  And, it's easier to incorporate a baby into your life than to plan your life around the baby.  Chris and I made sure to start this early...we took Hudson to church just 6 days after he was born.  Now that Hudson is getting into a regular nap routine, I'm trying to still stay flexible...if one of his naps is in the stroller or car seat than that's ok with me.

5.  I have a whole new appreciation for my body.  No, my tummy will probably never be as flat as it was before he was born but that really doesn't matter anymore.  It is simply amazing to me that God is allowing me to provide Hudson will all the nutrition he needs, straight from my own body.  Breastfeeding sometimes feels like a full time job but I wouldn't have it any other way.  It is honestly one of the most rewarding and amazing experiences I believe you can have as a mother.

And finally, no blog post would be complete without a few pictures of little man! 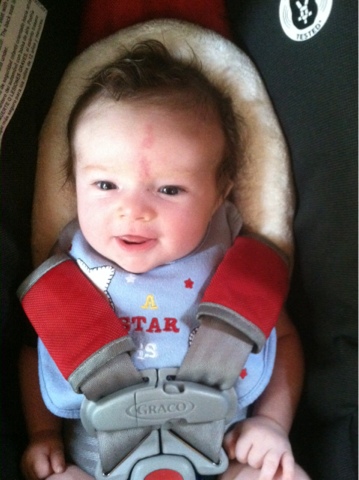 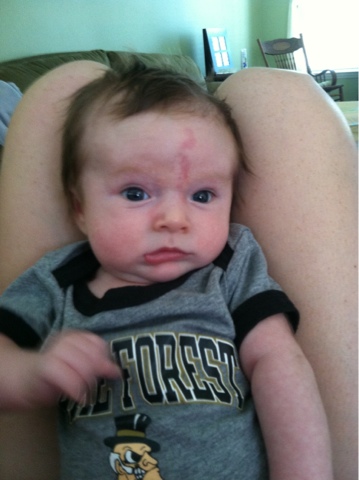 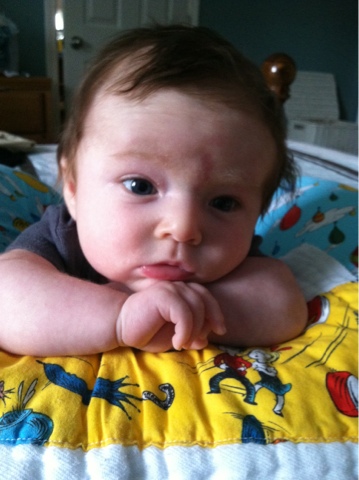 Posted by chrisandabbie at 4:52 AM No comments:

Over the past few weeks we have started "sleep training" Hudson.  We are not really doing things by the book as Hudson has been a good sleeper since the beginning so we haven't been too worried about it.  But, we attempt to do the "eat, play, sleep" cycle now that he isn't a sleepy newborn anymore.  We also try to get him to nap at least once a day in his crib, preferably in the early afternoon.  We have learned that he really dislikes being swaddled, but we have also learned that he does not stay asleep long if he isn't swaddled.  On Sunday afternoon we put him down for a nap in his crib and within a few minutes of wrestling (we watched him the whole time on the monitor), he ended up getting his arm out.  It didn't take him long after he got "free" to fall fast asleep. 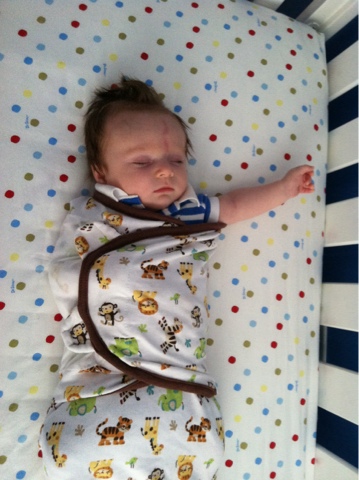 For a few days last week he was sleeping 6-7 hour stretches at night...but the past 2 nights he has been up to nurse at 2am.  I am not comfortable yet with letting him "cry it out" in the middle of the night especially when I don't think he's really even ready to drop the nighttime feeding.  So, for now, I'll just cherish those special moments I have with him in the middle of the night when he falls asleep in my arms after nursing.  Before I know it, he will be sleeping through the night and I'll wonder where my baby went!
Posted by chrisandabbie at 12:31 PM 1 comment: