In just 2 short months little man will be eating solid food! It's very very important to me that he learns to eat healthy food and tries a variety of food from a young age. If our pediatrician approves, we are going to do baby-led weaning and skip the mushy baby food stage and skip right to finger foods (age appropriate foods of course). So, Chris and I have decided that in order to teach Hudson about healthy eating, we need to start eating better! Starting the next time we go grocery shopping we are going to start eating clean- or at least attempt to come close. Basically we are going to eat fruits, vegetables, whole grains, lean meat, and some dairy. We are going to try to stay away from much processed foods and any food with things in the ingredient list that we can't pronounce! I know this is going to be really tough at the beginning. I'm anticipating being hungry all the time at the beginning. But I'm also really excited to start because I know if we stick with it we will not only be setting a great example for Hudson but we will also feel better and have more energy in the long run! So, wish us luck!
Posted by chrisandabbie at 5:49 PM No comments:

Measurements: Hudson weighed in this morning at 14 lbs 15 oz putting him in the 40th percentile.  He was in the 60th percentile at 2 months but he is still growing well and gaining appropriately.  He measured 25.5" long today which is the 65th percentile, just about the same last 2 months ago.  He is quickly outgrowing all 3 month clothes and even his 3-6 month sleepers!  He wears mostly 3-6 month onesies and 6 month sleepers.  He has also outgrown a few of his cloth diaper covers already!  Thankfully we have plenty of the next size up which should fit him until he is potty trained.

Eats: I am thankful everyday that I produce enough milk to meet Hudson's needs.  He nurses 3-4 times a day if I'm at work and takes 2 bottles.  If I'm home, I solely nurse him (I have to pump enough at work, I try to avoid it at home!).  We had to switch his bottles from Avent to Dr Browns (which also happens to be our pediatricians name oddly enough!) because Hudson would get really uncomfortable after taking a bottle- arch his back, cry, and spit up a ton.  Since starting on the Dr Browns this week, he has been a happy little camper with a bottle.  He generally will eat about 6 oz at at time in a bottle.  I am really in no rush to start him on any kind of solids, we are going to try to hold out until 6 months and then start him on oat cereal (an alternative to rice cereal recommended by our pediatrician).

Sleeps: Can I just skip this category this month?  Ugh.  Well, let me start on a positive note.  Hudson is in a really good nap routine thanks to our awesome babysitter Maggie.  He generally takes a 30 minute nap in the morning, a 2 hour nap in the afternoon, and then sometimes another evening nap.  I'm thankful for this predictable schedule!  Hudson was a champion sleeper at night until shortly after he turned 3 months.  And then several things happened.  I do believe he had a growth spurt and was hungry in the night, thus waking up.  Also, he learned to roll from him back to his tummy.  So, we stopped swaddling him for obvious reasons and he had trouble learning to sleep without the swaddle.  Also, he started rolling over in his sleep and getting frustrated that he was on his belly (although he loves tummy time during the day).  So, we went from him sleeping 9 hour stretches to waking up every 2-3 hours again.  The easiest way for me to calm him down is just to feed him, so that's what I have been doing.  My pediatrician assured me there is NOTHING wrong with this (despite people's constant advice to let him cry it out).  However, if I ever want to sleep a whole night through, I probably need to start letting him cry a little bit (or a lot) longer and he will learn to self-soothe.  It's probably going to take me wearing ear plugs and Chris being the one to go in during the night for this to happen.  So, we'll see.  I'll keep you posted next month...

Milestones: Hudson is now rolling both ways- tummy to back and back to tummy.  He rolled tummy to back for the first time on July 27th.  Now you can't keep him on his back, he just wants to be on his belly!  He is also getting a lot more interactive- he loves to laugh!  Hudson experienced his first softball tournament.  The first Saturday in August we spent the entire day, 8am-10:30pm, at the ball first.  Hudson was a trooper!  He did take a few naps in the stroller and actually enjoyed just being outside all day!

Likes: Little man still loves to be held as much as ever but he also enjoys playing on his tummy during tummy time (which is anytime you put him down because he just rolls over).   Hudson also loves his thumb!  He has found it and has officially become a thumb sucker!  Hopefully this won't be too hard to break...

Dislikes:   Sadly Hudson has started not enjoying the stroller quite as much.  The past 3 times I have tried to take him out running he has fussed and I end up carrying him while pushing the stroller.  But, soon he will be big enough to be taken out of the carseat and sit in the actual stroller part so hopefully he will like that a bit better!  But, other than that, Hudson is a pretty happy baby!  There isn't much that he doesn't enjoy!

I love this sweet, happy boy and can't wait to see what the next month will bring! 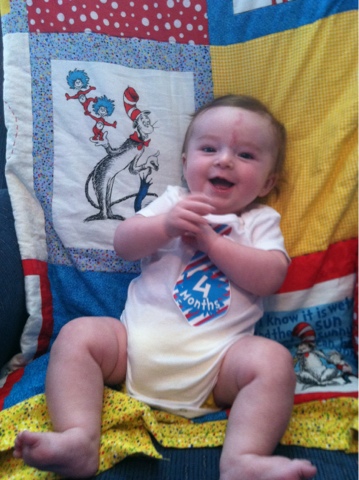 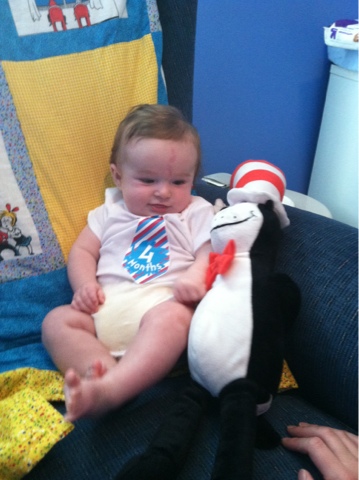 Posted by chrisandabbie at 5:29 PM No comments: